As we enter the last week of the municipal election, in the interest of transparency, like 4 years ago, I will be sharing with the residents of Ward 5 both my donation and my expense list up to the 10th of October. Yes, I might receive and spend a little bit more in the remaining 7 days but what you will see below will represent about 90% of all my donations and costs throughout this campaign.

Although Elections Alberta’s Chief Electoral office does not consider a violation for individuals to accept contributions and expenses prior to being registered as a candidate (trust me, I’ve asked); I still believe that I should disclose what I’ve spent of my own funds as I collected the necessary signatures in order to run for City Council. Please see below the complete table with these “pre-candidate” expenses. Also, it is important to mention, that I did not ask/use any contributions, outside of my own during this period, as I thought it would be inappropriate to do so before becoming officially a candidate. 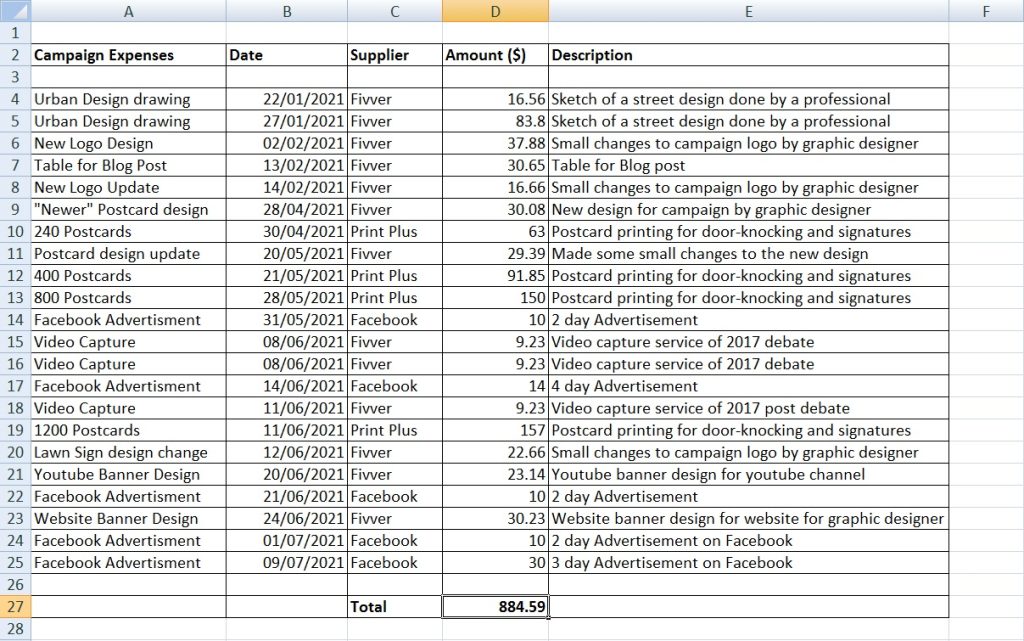 Donations and contributions as a candidate
After I had registered officially as a candidate , I had continued spending some of my own personal funds (note: a candidate can spend up to 10,000 $ of his own funds during the campaign period/year) but I was also fortunate enough to receive donations from a number of friends. Please see the names and amounts of these contributions below:

Contributions and Donations received as a candidate

Important mention – My recycled signs and recycled website
I would also like to point out that throughout the campaign, I reused most of my lawn and smaller fence signs from 2017. I did this for mostly economical reasons but also to reduce waste. As we can all see , Ward 5 has been inundated with signs and the vast majority of them will end up in the landfill. I would also like to give you an estimated cost of these signs as well since I have used them for campaign purposes.

I also had a similar “re-use” approach to my website, having renewed it every year in order to maintain my blog posts from 2017 to demonstrate my commitment to the causes I talked about 4 years ago. As well, I was aiming to keep myself honest in case I was wrong about certain predictions, such as the increasing costs related to the Blue Line and the City’s failure to address the smallest of community issues.

Conclusion: The importance of transparency
I can tell you as someone who is going through their second campaign as a candidate, running for elected office is not easy. Some rules are not clear, there is a lot of apathy , many promises are broken and those that have the biggest finances get the most exposure/help for what is a titan task (if you aim to do it well). Still, with all these challenges, regardless of a candidate’s budget, there is still not doubt in my mind, that every person who runs for public office must be transparent and honest. Being transparent (or not) about once’s campaign financial resources and their expenditures is the earliest indicator of how that candidate will behave in office regarding other sensitive/vital information. I hope that throughout this campaign, I’ve demonstrated my honesty and transparency in regards to what I want to do as a City Councillor in Ward 5 and how I plan to achieve those goals. On October 18th – Vote Tudor Dinca!